The Farmington Canal Heritage Trail, An Accessible Path to Nature

Celebrating the Trail's Accessibility to Nature

April is here. The weather warms, days lengthen, plants sprout, and birds arrive. Earth Day, April 22nd, is a day to celebrate one of my favorite stretches of the Farmington Canal Heritage Trail, the roughly three and one quarter miles running through wetlands and farmland from Copper Hill Road in East Granby CT to Congamond Road in Southwick MA. Like most of the trail's entire route from New Haven to Northampton, it's accessible to almost anyone who wants to be outdoors enjoying nature without having to hike through fields, forests, and marshes. In step with the countless walkers, joggers, cyclists, and dogs pulling their masters, you can find folks using walkers, pushing baby strollers, and motoring in wheel chairs along this comfortable, level pathway. The trail's accessibility to people from all walks of life is a celebration itself. So for anyone who wants to be outdoors enjoying nature, especially birding like I do, the trail has much to offer. While its path is different from the terrain of nearby hills, woods, and swamps I often hike, the trail provides excellent opportunities to exercise, socialize, and bird watch all at once.


For the better part of the past two decades I've walked, run, and cycled along many miles of the treasured Farmington Canal Heritage Trail, however it's only the past few that I've spent countless hours on it observing and photographing birds, especially on the East Granby to Southwick section. I owe much of my new found hobby to my friend Chris Fisher, an expert nature photographer of distinction from East Granby who travels the trail, too. He's coached me on camera selection, and more importantly on techniques to improve my photography skills. Check out Chris's website at Natural Expressions Photography to learn more about him and his nature photography exhibitions.

Birding Along the Trail
In March bird activity along the trail picks up and lasts through most of the fall. Some birds are year-rounders, some are flying in during the spring to nest and raise their next generation, while others are passing through en route to breeding grounds farther north, and then passing through again in early fall southbound for their winter home.

To capture the essence of what the trail's accessibility can yield for birders, I've created several collages of bird photos I've taken without having stepped off the path, not even an inch. Certainly, there were many days (the majority, in fact), when I saw nothing of note and left without any pictures. Often it's when the trail is busy with foot and cycle traffic that birds keep their distance, but when I have successfully photographed a particular bird, I've reaped the rewards of persistence, patience, and calculated timing that are the keys to what it takes to be in the right spot at the right time to photograph nature in the wild. 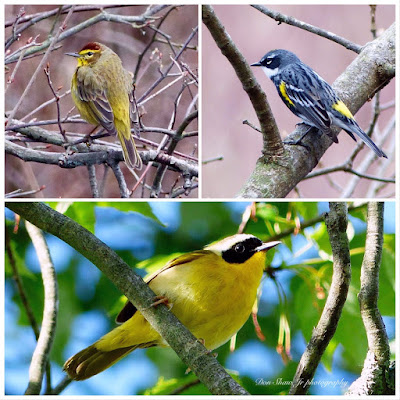 Clockwise from top left are a Palm Warbler, Yellow-rumped Warbler, and a Common Yellowthroat Warbler photographed soon after arriving in April and May along the wetlands nearing the CT-MA border between mileposts 21.6 and 22.0. 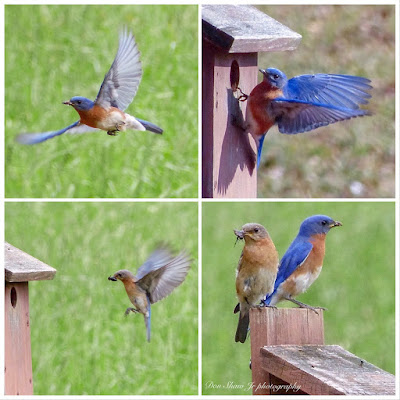 In this collage Eastern Bluebirds are making sure their chicks are well fed in the Bluebird house near milepost 21.0 in Suffield CT. I first photographed this couple as they were building their nest, and then later as they were feeding their brood. Unfortunately, I was not present when their young fledged, though I visited nearly every day. It happens quickly, and timing and chance are everything. 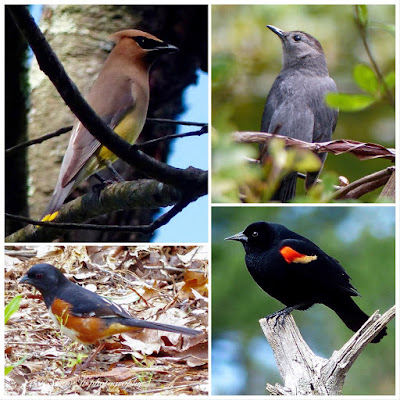 Clockwise from top left are a Cedar Waxwing, Gray Catbird, Red-winged Blackbird, and Eastern Towhee. The Cedar Waxwing was photographed along farmland near milepost 21.0 in Suffield; the Gray Catbird was photographed in the trees along wetlands between mileposts 21.6 and 22.0; the Red-winged Blackbird in the marsh just north of milepost 20.0; and the Eastern Towhee near milepost 22.5 in Southwick.

These Eastern Phoebes arrived in mid-March in Suffield near the bridge at milepost 22.0 at the CT-MA border. They are among the earliest spring arrivals as they migrate to breed in this area. 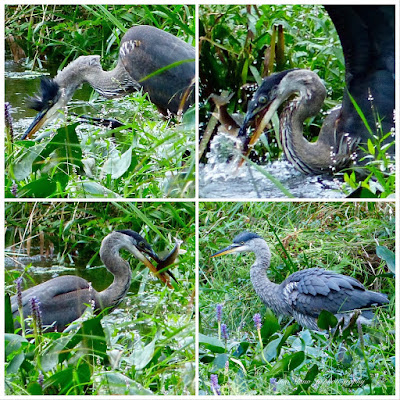 Late last summer for two days in a row I was fortunate to observe this Great Blue Heron fishing in the swamp between mileposts 21.6 and 22.0 in Suffield. On the day I captured these photos, I patiently leaned against a trail fence for almost an hour with my camera focused and ready for the heron to strike. When it did, I clicked away in rapid fire bursts capturing the action of a successful catch.


Spring is mating season. These three couples were sharing the same stream one morning north of milepost 21.6 and just past Mountain Brook bridge. Clockwise from the upper left are Canada Geese, Mallards, and Common Mergansers.

In this final collage are, clockwise from the top left, a male Wood Duck, A male Mallard, and a Mallard couple with their ducklings. The Wood Duck and Mallard were in the stream near milepost 22.0 at the CT-MA border; and the Mallard couple were in a vernal pool just north of the trail's entrance at Copper Hill Road in East Granby.

Final Thoughts on Celebrating the Trail
I've seen many other birds along the trail during the years I've been walking it. They include birds that typically gather around my home feeders, or nest in the trees in my yard such as Eastern Cardinals, Eastern Mockingbirds, Black-capped Chickadees, Tufted Titmice, Carolina Wrens, House Finches, and Blue Jays, among many others. Also, I've seen Red-tailed Hawks, Cooper's Hawks, Northern Flickers, and Downy, Red-bellied, and Pileated woodpeckers. Clearly, many species of birds may be seen simply by venturing up and down the highly accessible stretch of the Farmington Canal Heritage Trail from East Granby to Southwick. Beyond being able to walk among the birds that thrive in this habitat, what makes this section of the trail priceless is that's it's made for anyone and everyone to enjoy, and that's cause for an Earth Day celebration!