Jody Made a Difference

Mary Joellen "Jody" Putnam's philosophy recalls the last line of The Starfish Story, "It made a difference to that one." The story is about saving lives, even if just one, against seemingly insurmountable odds. The Starfish Story was a favorite of Jody's who would tell it often when people became discouraged. 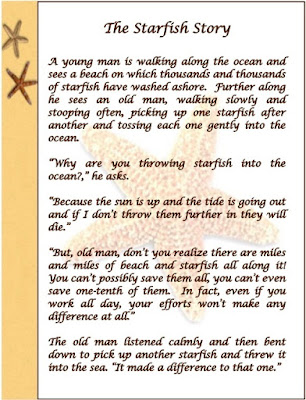 Saving just one life makes a difference. A difference of ultimate significance to the one saved and the one who saved the life. It's the profound difference that a single caring and committed person can make in just one person's life, but in Jody's case she made a difference in the lives of countless people in need. Jody saved lives. It was her purpose in life. Jody made a difference.

For more than twenty years Jody worked voluntarily and tirelessly with refugees who resettled in the Hartford area from Afghanistan, Bosnia, Burma, Iraq, Liberia, Nepal, Sierra Leone, Somalia, Sudan, among other countries. Her life's purpose was devoted to helping people in need, selflessly and unconditionally.

Jody died peacefully at age 74 on March 2, 2017, after suffering a stroke in February. Hartford will miss her leadership, and the contributions she made creating a better life for many of the vulnerable and victimized people among us. Asylum Hill Neighborhood leader Jennifer Cassidy expressed her hope "that Jody's legacy inspires others to follow her lead. It's a path more of us must walk."

On March 25, an estimated 300 refugees attended a multicultural memorial service for Jody at Asylum Hill's Cathedral of Saint Joseph. It was a special day for the refugees Jody served to share their everlasting gratitude and respect.

After a warm welcome by Fr. James A. Shanley, Rector of the Cathedral, and an opening prayer by Fr. Michal J. Dolan, several refugees celebrated Jody's life by speaking in honor of her generous and welcoming service to their communities. They praised the hours she spent helping them enroll their children in school, access health care, navigate the social service bureaucracy, and complete seemingly endless but necessary paperwork. Included were the following representatives from Burma, Nepal, Bhutan, Liberia, Somalia, Syria, and Bosnia who spoke from deep within their hearts about Jody's service:

As final speaker Sabaha Alihodzic concluded her tribute, she finished with the El-Fatiha, a fitting prayer from the Quran for the guidance, lordship and mercy of God.


Music by the Karen (Burma) Youth Community Choir filled the Cathedral with songs of peace and thanksgiving.

Jody's close friend and colleague Trinity professor Dr. Janet Bauer reminisced with me that "Jody was an extraordinary cultural navigator for so many Hartford families from different refugee groups in the post resettlement stage. They benefited from her philosophy that becoming self-sufficient sometimes required personal, one-on-one assistance, beyond the first several months, from other Hartford area residents like herself who were proficient in the language and culture."

Jody was an inspiration to many of Dr. Bauer's students as captured in the following excerpt from the tribute read by Maryam Bitar, a Trinity student volunteer from Syria:


"In addition to her impact on so many people from Hartford's refugee communities, Jody was also an inspiring mentor to many students who interned with her through Trinity College, as she provided support to refugee families. Jody embodied a philosophy of one-on-one support that meant students learned how to be compassionate and caring, to listen to what refugees said about their needs and in that way assisting them to become independent -- whether it took six months or three years. And beyond that, well, she remained a friend to everyone."

Other Trinity students shared their thoughts:

"Jody's dedication to refugees in the greater Hartford area was profound and it left a mark on all of us as we carry her passion through our efforts to promote cultural competency..."  -- Daniela Santagelo Akaratovic, newly registered nurse working on refugee health issues, Hartford, CT

"Jody acknowledged every single person with a certain respect. Jody was so pure by heart and yet had strong opinions. Jody was unique. Just by observing her work and spending time with her for a couple of weeks I learned the biggest lesson in life. Acknowledge every person with all the respect in the world and help people without expecting gratitude. Be pure by heart no matter what you do or say..." -- Nina Pariahs Ziari, international student from Denmark, now working in refugee resettlement in Copenhagen.

"From Jody I learned that the world isn't always kind and that doing the right thing is often thankless. I will always admire her empathy and respect for refugees, and I will never forget the smiles she brought about when she visited people. I hope to one day have the effect on one person that Jody had on so many."   --  Jenna Carroll, now a law student at Fordham University perhaps one day doing immigration legal work.

After Jody's son Scott Ahlgren thanked everyone for attending the tribute for his mother and conveyed his family's gratitude, Lina Caswell, a former Hartford social services professional for whom Jody was a dear friend and mentor, presented Scott and Jody's other son, Steven, a City of Hartford Proclamation recognizing Jody's immeasurable contribution to improving the quality of life for the City's newest residents. Following Lina, Padam Bharati presented a certificate of gratitude from the Nepalese community honoring Jody's service.

In reflecting on the Jody's life, Lina told me that Jody's main motto throughout her work was to "treat people as friends, not clients, because when in need you go to your friends." In providing social services, the technique of being one's friend is unconventional, and not without risk, but "Jody always believed in meeting people on an equal footing." Her friendship approach was one of warm acceptance, fierce loyalty, and, when needed, frank honesty. As she reflected further on their years of service together, Lina said, "Jody did not romanticize refugees. She wanted to help them regain their dignity, not to be stigmatized by labels, to give them back their identity so that they may all be seen for who they truly are." Lina was impressed and fascinated that Jody always spoke first to strangers, never afraid to engage in small talk to help her see the stranger, the newcomer, as a new friend. "Jody's mission was to meet people where they are to help them move forward so that after a substantial initial investment of whatever was necessary to get them situated, coupled with positive experiences navigating the multitude of our society's systems, they ultimately would become independent and successful community members."


After all the tributes and remembrances were shared on March 25, perhaps the most fitting tribute of all is that at least three refugee families have named a child Jody keeping her name alive in their communities.

Jody made a difference.


Donations may be made in Jody's remembrance to the International Rescue Committee: https://www.rescue.org or 1-855-9RESCUE.